Progress made and potentials unexplored

During the war of liberation of Bangladesh, a Canadian parliamentary delegation was sent to India to witness the plight of 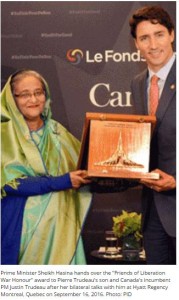 Bangladeshis fleeing the war-torn country in 1971. The situation of the refugees and their number were reported to the government of late Canadian Premier Pierre Trudeau, which led to increased financial assistance and humanitarian support in West Bengal and the then East Pakistan borders. Canada also was one of the first western countries to recognise Bangladesh as a sovereign state on February 14, 1972. The Late Pierre Trudeau was posthumously conferred the Friends of Liberation War Honour award by Bangladesh Prime Minister Sheikh Hasina on September 16, 2016.

In the early post-war years, the support of Canada was limited to reconstruction and rehabilitation and gradually moved into good governance, primary education, health, agriculture, environmental sustainability and women’s empowerment. Both countries have since then established robust bilateral ties based on mutual core values of democracy and diversity. The Government of Canada confirmed Bangladesh as a country of focus in South Asia in 2014. The decision was based on Bangladesh’s ability to effectively utilise development assistance. In 2014-2015, Canada provided bilateral aid worth up to USD 70.32 million. Canada’s development projects in Bangladesh endeavour to create opportunities for children and youth and to encourage sustainable economic growth. Gender equality, environmental sustainability, and good governance are emphasised in major initiatives.

A joint cooperation strategy was signed in June 2010, which supports a coordinated approach and a strategic division of labour between development partners and Bangladesh. Governance is an important pillar for Canadian partnerships that entails capacity building, economic management and increased accountability and efficiency of government institutions. Canada has supported the provision of public financial management training to more than 6,600 government officials, installed improved information technology (IT) infrastructure and provided extensive IT training to over 1,200 officials and staff to help improve audit procedures in Bangladesh.

The volume of bilateral trade has crossed USD 2 billion in the fiscal year 2014-15 and is expected to reach USD 5 billion by 2022. Canada is now one of the top seven export destinations for Bangladeshi manufacturers of RMG, leather, and jute products. Bangladesh enjoys duty- and tariff-free access into its markets for many products including apparel, woven, and knit. After India, Bangladesh is the second largest source of Canadian merchandisers’ import from South Asia. Bangladesh is the third biggest market for exporting pulses for Canada, and a significant export destination for cereals, vegetables, iron and steel. Another notable fact is that, Bangladesh is the second largest Canadian agri-food buyer in South Asia.

There is scope for greater collaboration and business-to-business linkages in the SME sector. For increasing trade, establishment of common accreditation board for product standards would be useful. Public private partnership for infrastructure development also is an area unexplored but with immense potential. New areas of cooperation should ideally contain three components – i) addressing needs and challenges of Bangladesh, ii) fewer, larger projects with long-term goals, and iii) capacity building and empowering institutions for sustainable development.

Canada has supported initiatives upholding human rights and advancing democratic values. Canadian support to empowerment of civil society outfits and think tanks has made significant contribution in improving governance and strengthening accountability. Political freedoms and civil liberties enhance moral authority of a country and this in turn provides the legitimacy to advocate for reform and offer assistance. This is evident in the Canadian support for concerted efforts in strengthening labour standards and rights issues that address child marriage. Bangladesh can seek Canadian cooperation in managing undocumented migration and efforts towards resettling Rohingya refugees. The Countering Violent Extremism (CVE) Program can be strengthened further by incorporating counter-terrorism capacity building and engagement with different stakeholders. Canada, the land of multicultural principles, has much to offer in terms of soft power like education, literature and art. To end with the words of wisdom of the Late Pierre Trudeau, “The past is to be respected and acknowledged, but not to be worshipped. It is our future in which we will find our greatness”.

You are in: Home / Resources / Commentary / Progress made and potentials unexplored