During the first round of Austria’s election in April 2016, Nobert Hofer came close to becoming head of a Western European state, first time as a far right candidate since the WWII. Later in May, Philippines saw the election of Rodrigo Duterte as president. While Mr Duterte had been a Mayor of Davao for two decades before his election as president, he comes from a local political dynasty, is the first leader of the Philippines from his locality and had to campaign on recognizably populist pledges to counter the then existing political elite. Next month, the Britons collectively voted to leave the EU in a referendum convened by the then Prime Minister of England, David Cameron. After the Brexiteers won the referendum, Mr Cameron gave up office in an emotional confession of his resulting inability to continue leading the nation. Brexit was a reflection of the populist sentiment taking action outside traditional parliamentary and presidential elections. 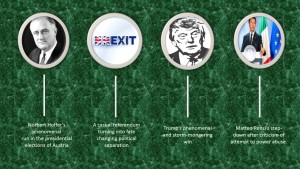 Along the same stream, next up in the chronicles was the US elections in November 2016. Although there have been questions whether the election of Mr Trump is an outbreak of the populist sentiment, this much is within consensus that Mr Trump did take advantage of the collective anxiety that paves the ground for rise of anti-establishment attitude.

The major political and financial pledges made by Mr Trump reflect how he had out-maneuvered traditional political campaigns with a marketing one spelling out simplistic solutions like wall-building in the borders, job-fetching from China and banning immigrants. Trump continued to uphold populistic sentiments both inside and outside US when he promised to “drain the swamp” and called himself “Mr. Brexiteer”.

Italy’s case was next in line: in a peculiar attempt at catapulting change, leader of the Five Star Movement party, Beppe Grillo, a self-proclaimed populist, joined hands with the Prime Minister Matteo Renzi. Mr Renzi, in consultation with Mr Grillo, called for a referendum to simplify the country’s political system. Critics argued against Mr Renzi that he was in fact trying to institutionalize more power for himself through the referendum. Later in December, Mr Renzi resigned after losing the vote. In the same month the impeachment of South Korea’s president came as protesters were infuriated by perceived unfairness and the fact that the elite were acting with impunity.

Even as 2016 has ended, the spread of the populist sentiment has much room to take since this year elections are scheduled in France, Germany and Holland. However much the unlikelihood of the populist-leaning parties’ forming governments, the political crisis is likely to continue. Cas Mudde, an academic at the University of Georgia and author of The Populist Radical Right, cautions that the potential gains from forming a populist government may not be as dramatic as expected. This only means that instead of fearing the tide, our politicians have to do a better job in finding outcome and impact oriented solutions to the pressing problems.

You are in: Home / Resources / Blogs / The Populist Upheaval