A short history of a big deal 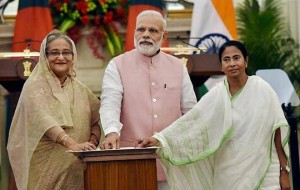 Bangladesh Prime Minister Sheikh Hasina’s visit to India and the signing of 36 agreements of cooperation ranging from the economic, defence and power sectors to the peaceful use of nuclear energy shows that significant progress has been made in Indo-Bangla relations in the last eight years. However, the stalled Teesta treaty continues to eclipse bilateral relations as water affects the lives of ordinary people across vast spaces of land. It seems that in spite of the goodwill prevailing in Delhi, West Bengal has become a thorn in Indo-Bangla relations.

Bangladesh shares 54 of its 57 transboundary rivers with India. After the Ganges, Brahmaputra and the Meghna (GBM) river system, Teesta is the fourth largest river shared between the two countries. In 1983, an ad hoc water-sharing agreement allocated 39% of the water flow to India and 36% to Bangladesh and remaining 25% was left unallocated for a later decision. The Teesta river’s floodplain covers an area of 2,750 sq km in Bangladesh, supporting roughly 10 million people. An estimated one lakh hectares of land across five districts of Bangladesh are severely impacted and face acute shortages during dry seasons. Apart from livelihood directly obtained from the river, agriculture is also affected as 14% crop production is dependent on the flow of the river. At stake are the lives of millions of people of Bangladesh who depend on the river for their survival. Therefore, it is imperative that the treaty provide equal allocation of the Teesta, a fair demand from the side of the lower riparian Bangladesh.

So near, yet so far

In 2011, during the visit of former Prime Minister Manmohan Singh to Dhaka, plans had been confirmed of an interim arrangement of 15 years, with India getting 42.5% and Bangladesh 37.5% of the river during dry seasons. The arrangement also included the setting of a joint hydrological observation station to gather accurate data for the future. The plans fell through when West Bengal Chief Minister Mamata Banerjee opted out of the delegation led by Dr. Singh to Dhaka, expressing strong reservations against giving Bangladesh a greater share of water.

Hopes were renewed during Ms. Banerjee’s visit to Dhaka in February 2015 when upon arrival she said, “Have trust on me on the Teesta issue… I will have talks on the matter with Prime Minister Sheikh Hasina.” Despite her reassurances, she continues to flip-flop on her stance on the share Bangladesh should get. Again during the visit of Prime Minister Narendra Modi in June 2015, Ms. Banerjee accompanied the delegation and positive expectations were rife on both sides. The Modi government accepted the new arrangement between India and Bangladesh, but Ms. Banerjee did not. Hence, the deal was not inked despite Mr. Modi saying “rivers should nurture the India-Bangladesh relationship and not become a source of discord”. The general perception was that the Teesta treaty could not be concluded before the West Bengal State elections in April-May 2016. Despite winning the elections for a second consecutive term, during her recent face-to-face talks with Prime Minister Hasina in Delhi, the Chief Minister stated, “Your problem is water, not Teesta. I am willing to look at any alternate proposal to address your issues.”

When the Chief Minister herself had appointed an expert committee headed by Kalyan Rudra in 2011 to study the Teesta issue, the report, though unpublished, was in favour of Bangladesh. Says Ainun Nishat, a prominent hydrology expert from Bangladesh, “India has completely dried out the river on our end during lean period by closing all the gates of the Gazaldoba barrage. That is unexpected from a friendly neighbour. This treaty is a formality, but India cannot ignore our rights to the river water.”

Ms. Banerjee has sat on the issue and been changing goalposts for six years, with Bangladesh hostage to its neighbour’s domestic politics as a State government refuses to play ball with the Centre. Speculation is now rife that Ms. Banerjee is trying to secure a financial package from Delhi and the Teesta treaty has become the bargaining tool for it. It is ordinary Bangladeshis who are bearing the brunt of this impasse.

With elections slated for early 2019, it is Ms. Hasina whose credibility is at stake at home after all that she has done for taking Indo-Bangla relations to newer heights. Unfortunately, the Bengal of India has become the sore throat in an otherwise evolving and matured Indo-Bangla relations.

Mr. Syed Munir Khasru is chairman of the international think tank, The Institute for Policy, Advocacy, and Governance. Email: munir.khasru@ipag.org

You are in: Home / Resources / Commentary / A short history of a big deal