Since Aug 25, over 400,000 Rohingya refugees have fled the Myanmar state of Rakhine into neighbouring Bangladesh.

Bangladesh has been harbouring the Rohingya for decades, bringing the total asylum count, according to unofficial sources, to around a staggering 900,000.

No other developing nation has hosted this many Rohingya refugees for so many years. The United Arab Emirates, Saudi Arabia and Pakistan, all Muslim-majority nations, together have given asylum to 560,000 Rohingya, much fewer than small, densely populated Bangladesh. Myanmar’s other democratic neighbour, India, is seeking ways to repatriate its existing 40,000.

A HISTORY OF REPRESSION

Myanmar’s current crisis springs from decades, even centuries, of rejection of the Muslim Rohingya people by the Buddhist-majority nation.

The Myanmar people tend to view the Rohingya as “illegal immigrants” from Bangladesh who refused to leave.

In fact, Rohingya have lived in Myanmar since the 12th century when it was an independent kingdom called Arakan. Hundreds of thousands more came from Bangladesh to Myanmar when the British imported labour. Over the centuries and decades, many intermarried into other ethnic groups. There are currently 1.1 million living in the country’s western coastal Rakhine state, which borders Bangladesh.

Despite being in an ethnically diverse nation, both the Myanmar people and their administration consider the Rohingya illegal Bangladeshi immigrants who once came to their land as agricultural labourers and haven’t left since. 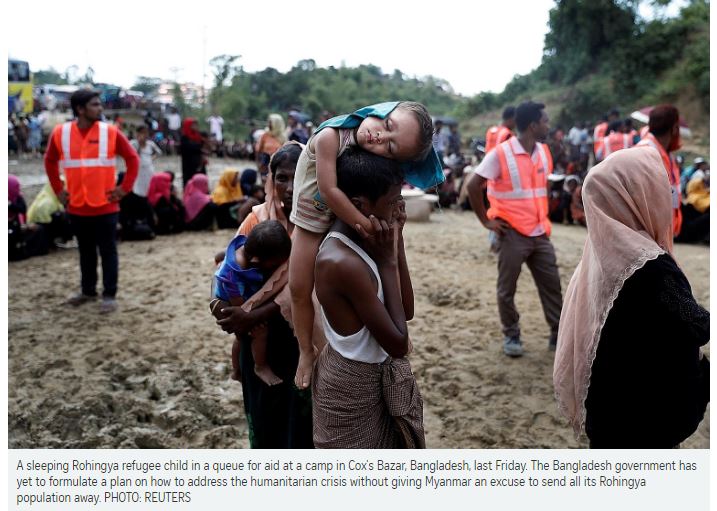 They are considered to be security threats encroaching on Myanmar resources. (If such is the grounds for their expulsion, then the millions of Indian labourers who moved from one end of British India to the other during the 200 years of British rule in India must also be repatriated to their place of origin!)

After Burma’s independence from the British in 1948, Rohingya were not included in the list of ethnic groups that could apply for citizenship, but those living in Burma for at least two generations were allowed to apply for identity cards that could later be turned into citizenship cards.

However, after the military coup in 1962, when citizens were required to have national registration cards, the Rohingya were given foreign identity cards that excluded them from having certain jobs and accessing certain public services.

The final blow came after 1982 when the Rohingya were excluded from applying for even the basic citizenship type from a category of three types, as they were required to prove that their family had been living in Burma before 1948, a proof requiring paperwork almost impossible to acquire.

Since 1962, there have been intermittent crackdowns on Rohingya, forcing them to flee to neighbouring regions from time to time. The scale and intensity of the crackdowns have intensified over the years and reached a critical point since the last attack on Aug 25.

Orchestrating the current crackdown from behind the scenes is Myanmar army chief Min Aung Hlaing, who in his official Facebook page has outright denied the Rohingya the right to proper treatment in Myanmar, labelling the entire crisis as a “Bengali issue”.

The general either does not know history or is in a state of selective amnesia. In desperation to justify the terror and savagery unleashed by his forces, he has chosen to use the cloak of a democratic government that has been described by United Nations Secretary-General Antonio Guterres as “not a perfect democracy… where the military has the upper hand”.

THE DILEMMA FOR BANGLADESH

This exodus has been described as a “textbook example of ethnic cleansing” by UN human rights chief Zeid Ra’ad al-Hussein. The exodus has been particularly difficult for Bangladesh, which now has to accommodate overwhelming numbers of Rohingya in a very short span of time in the city of Teknaf, which is one of its least developed regions. The Bangladeshi people and its government, in spite of having to deal with myriad social and political problems of their own, have been by and large accommodative to these incoming refugees.

Diplomatically, Bangladesh has been put in a tight situation. If it agrees to completely take in the refugees and integrate them like Germany did with Syrian refugees, then it gives an opportunity to Myanmar to direct all its Rohingya population into Bangladesh, accomplishing its goal of having no Rohingya in Myanmar.

When refugees are fleeing communal wars, famine or environmental catastrophe, it is inhumane to send them back to a place where no citizen is safe. But the case for Myanmar is very different as all other ethnic groups in the country are living functioning daily lives under whatever form of democracy it has.

By taking in all Rohingya, Bangladesh runs the risk of legitimising Myanmar’s false claim that Rohingya are illegal Bangladeshi immigrants who must be returned to their country of origin where they belong.

It is rather unfortunate that Bangladesh has been put to such a conundrum by its next-door neighbour, with whom it did not have a bad start. In fact, Burma was one of the first countries to recognise Bangladesh in January 1972, and General Ne Win in April 1974 visited Bangladesh where he and Sheikh Mujibur Rahman tried to forge the foundation for a new relationship. 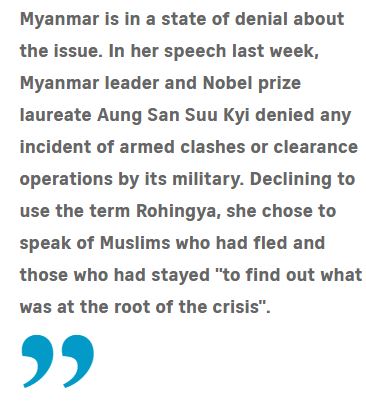 The Bangladesh government has yet to formulate a well-thought-out strategy and plan how to address the humanitarian crisis without giving Myanmar an excuse to send all its Rohingya population away.

For now, Bangladesh has already made an additional 810ha of land available for camps to house refugees in Teknaf. The Rohingya there will be given temporary shelter and other necessary relief materials, but will be registered, fingerprinted and excluded from mixing with the local community.

Bangladesh itself is reeling from frequent river erosion, coastal flooding and rapid climate change,and will soon be logistically unable to accommodate any more Rohingya flocking across its border. It has urged the international community to build pressure on Myanmar, instead of pushing Bangladesh to stretch its limit by taking in more refugees.

The UN, European Parliament and many others have branded the situation in Myanmar as inhuman and akin to ethnic cleansing.

Myanmar is in a state of denial about the issue. In her speech last week, Myanmar leader and Nobel Prize laureate Aung San Suu Kyi denied any incident of armed clashes or clearance operations by its military. Declining to use the term Rohingya, she chose to speak of Muslims who had fled and those who had stayed “to find out what was at the root of the crisis”. Mr Salil Shetty, the secretary-general of Amnesty International, aptly questioned why Myanmar would restrict aid workers and international media from visiting the Rakhine state.

Even as the world debates the responsibilities of rich and poor nations to refugees, the reality is that Bangladesh, a natural disaster-prone, densely populated and resource-constrained country, is valiantly struggling to provide food, shelter and basic amenities to the most persecuted and helpless minority in the world – while a powerful army general in Myanmar has the luxury of roaming around in social media in a state of “amnesia of convenience”, and a Nobel laureate, who in her Nobel Peace Prize acceptance speech stated “ultimately our aim should be to create a world free from the displaced, the homeless and the hopeless”, continues to be in a state of denial.

You are in: Home / Resources / Commentary / Bangladesh bears brunt of Myanmar’s crackdown on Rohingya