Bangladesh – from near death to a South Asian success story

That it is ahead of its neighbours in growth rates and other indicators shows nations can overcome dauntingly poor odds. 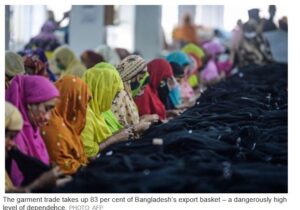 Tomorrow, Bangladesh, the youngest South Asian nation, will mark the 50th anniversary of its declaration of independence – one that pitched what was then East Pakistan into a bloody nine-month liberation war.

By the time it gained full independence on Dec 16, 1971, millions had lost their lives while about one million people rendered homeless or fled to India.

Looking back, the odds stacked against Bangladesh were huge. Besides the trauma of its violent birth, it suffered natural disasters, famines and more political turbulence in its early years. There was pervasive poverty, a high population growth rate and an economy over-reliant on agriculture.

And yet today, it is outpacing its South Asian neighbours in economic growth rates. According to World Bank figures for 2019, Bangladesh’s gross domestic product (GDP) growth was 8.2 per cent, ahead of India (4.2 per cent), Pakistan (1 per cent), Sri Lanka (2.3 per cent), Nepal (7 per cent), Bhutan (5.5 per cent) and Maldives (7 per cent).

What’s more, Bangladesh is doing better than India and Pakistan on social and human development indicators such as female literacy and workforce participation, infant mortality and rural primary health. In 1971, the average Bangladeshi’s life expectancy was only 46.5 years; by 2018, it is 72 years, two years higher than India’s.

Since 2010, eight million people have moved out of poverty. More are moving to cities while rapid Internet penetration and mobile phone connectivity augur well for further development.

Bangladesh has also over the years worked to reduce two key vulnerabilities. First, it has reduced its reliance on agriculture by expanding into other sectors such as pharmaceuticals and the apparel industry. The latter is its biggest export earner, worth over US$27.9 billion (S$37.5 billion) in 2019-2020. Bangladesh’s garment industry is also one of the most globally competitive, second only to China.

Second, while there is not much the country can do to stay out of the path of cyclones, it has creditably built early warning and other disaster management system that has reduced the loss of lives and damage from storms and floods.

For all of its achievements at this point of its nationhood, Bangladesh faces many challenges ahead.

On the political front, it has fallen behind in terms of moving towards a multi-party, pluralist democracy. The last two national elections have been largely uncontested and not participative. Power has become more centralised in the Prime Minister’s Office. The latest Democracy Index by the Economist Intelligence Unit labelled the country a “hybrid regime”, implying substantial irregularities that prevent free and fair elections.

Also, the adoption of the 2018 Digital Security Act has been criticised by the media for giving police sweeping powers to obtain digital information and to detain people accused of expressing offensive views online.

Despite its steady export performance, Bangladesh ranks 168 out of 190 countries in the World Bank’s Ease of Doing Business Index for 2020, only ahead of Afghanistan in South Asia.

In short, good governance, freedom of speech and rule of law continue to be areas with much room for improvement.

Economically, its huge success as an apparel producer is a mixed blessing. The garment trade takes up 83 per cent of Bangladesh’s export basket – a dangerously high level of dependence. In 2013, the collapse of poorly constructed garment factory Rana Plazain Dhaka, killing 1,134 workers, brought the the sector’s treatment of its workers into global spotlight.

Although the industry has scrambled to make its practices compliant with international standard, another disaster would leave the country with few other industries to fall back upon.

Light engineering, ceramics, pharmaceuticals and frozen food are thrust sectors that could fetch billions for the country, provided there is the right environment to garner foreign investments.

The birth of Bangladesh has been attributed to ethnic and language divides between West Pakistan (mostly Punjabi, Pashtun and Sindhis) and East Pakistan (mostly Bengali). In a twist of fate, one of the challenges Bangladesh now faces is the sheltering of close to a million people escaping ethnic violence – the Rohingya refugees from Myanmar.

Since August 2017, waves of Rohingyas have fled into Cox’s Bazar to escape rape, arson, killing and attacks by the Myanmar army. Refugees live in extremely congested camps and are highly dependent on external aid. Three years into the crisis, the matter is not only far from being resolved but has worsened with the military junta once again in power in Myanmar. With a roiling political crisis there, what is clear is that the Bangladeshi government will have to bear the brunt of sheltering this massive group left in limbo, putting considerable strain on the country’s already limited resources.

A half century is a good time for any country to take stock of what it has achieved, what it still has to do and prepare for the challenges yet to come. Given how close it came to being stillborn, Bangladesh has come a long way indeed. But there is a certain fragility to the hard-earned results, contingent as they are on the forces of nature, such as the rising seas, as well as on the vagaries of man-made political decisions.

That said, that Bangladesh has come so far despite the daunting odds it faced 50 years ago and continues to face today are also a reminder of the power of human agency and sound policies to transform lives.

Syed Munir Khasru is chairman of the international think tank, The Institute for Policy, Advocacy, and Governance, with presence in Dhaka, Delhi, Melbourne, Vienna and Dubai.

You are in: Home / Uncatagories / Bangladesh – from near death to a South Asian success story