China tries to win over critics of the new Silk Road

China has invested billions of dollars in building highways, ports, and railways in more than 60 countries since 2013, as part of its Belt and Road Initiative (BRI). In many countries, however, BRI is facing a backlash. Chinese-financed projects have been trimmed, suspended, or put under increased scrutiny in Sri Lanka, Myanmar, Nepal, Pakistan and Malaysia, over an alleged debt trap and unscrupulous dealings.

In 2017, Hambantota port in Sri Lanka was taken into Chinese hands, along with 69 square kilometres of land, after the government defaulted on debt payments. Pakistan, reeling from a balance of payments crisis, has asked for retrenchment of and easier terms on the China-Pakistan Economic Corridor (CPEC). 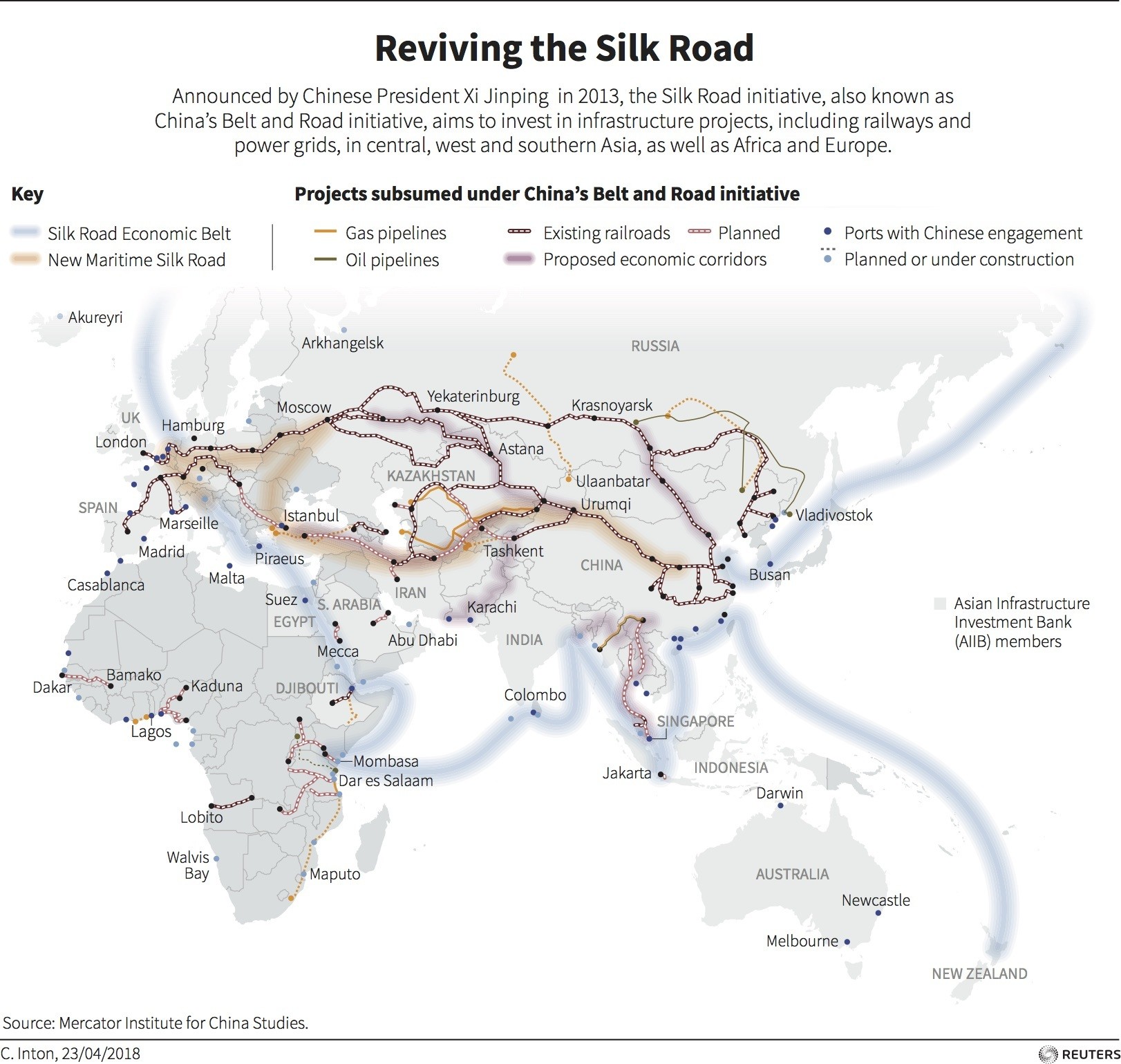 BRI has become a cause of concern for its impact on the more vulnerable countries. According to the Centre for Global Development, distress from a highly unsustainable level of debt and interest rates has worsened in countries holding debt from BRI projects.

For instance, a railway project in Laos involves $6 billion of Chinese lending, almost one third of its annual GDP. The unsustainability of these debts has fuelled suspicions about China’s avowed intention of “community and shared destiny” in funding these projects. On top of that, almost 89% of the BRI contractors are Chinese companies.

BRI’s foggy definition and the ambiguity over its long-term objectives have also raised questions. There is no clear map of the scheme, resulting in expansion beyond the initial range of Middle East and Eurasia to the Pacific islands, Latin America, Africa and the Arctic.

The secrecy stokes discomfort and fuels speculation that the initiative’s goals are beyond just economics and connectivity. To many of the ardent critics, BRI is a blueprint by China to turn Eurasian countries into its tributary states under a singular power.

Some of the new governments came to power in Sri Lanka, Malaysia, and the Maldives by railing against regimes that were subservient to China. But a focus on BRI solely through geo-strategic lenses falls short of the project’s reality.

For example, it is unclear how China will militarily benefit from the Hambantota port in Sri Lanka since, unsurprisingly, India effectively vetoed any Chinese naval presence in the port.

Moreover, according to an Asian Development Bank estimate, between 2017 and 2030, Asia needs at least $26 trillion investment in infrastructure development for sustaining its current GDP growth and adapting to climate change. That kind of money is not coming from anywhere and, for many, BRI is a welcome move in bridging the gap.

Given China’s successful experience in building highways, high-speed railways and power grids that have transformed the country into a global economic powerhouse, BRI projects make sense to infrastructure-hungry Asia and Africa.

From the Chinese perspective, its surplus foreign exchange reserves need more lucrative destinations than US government securities. BRI helps address China’s problem of excess capacity in steel, cement, and other materials by using them in infrastructure projects. A focus on developing China’s western hinterlands, by establishing connections with Eurasia and its 14 neighbouring countries is also a reasonable economic proposition from China’s standpoint.

As leaders around the world gathered in Beijing in April to attend the second Belt and Road Forum, the mega initiative received a much-needed boost in the face of lingering concerns about the project’s intentions and long-term impact.

Thirty-six heads of state participated in this year’s forum, compared with 28 in 2017. In total, over 6,000 participants from 150 countries and 92 international organizations, including the heads of the IMF and UN, took part.

A total of $64 billion worth of projects were signed, while the BRI parties agreed on 283 projects to deliver in transportation, taxation, trade, auditing, technology, culture, and media.

Chinese President XI Jinping chose to respond to the critics of BRI by vowing to increase imports from developing countries, reducing trade barriers, implementing foreign investment friendly initiatives in China, and shifting focus to a high quality and sustainable framework for BRI projects.

From Europe, state leaders of only seven EU nations took part in this year’s forum, with Italy being the key participant. Countries such as France, Germany, and UK sent higher level representatives than they did during the first forum.

The ASEAN region was well represented with only the Indonesian President, Joko Widodo, absent due to elections. From the Middle East, UAE’s Prime Minister, Sheikh Rashid Al Maktoum, was among the attendees; with Saudi Arabia and Iran represented at ministerial level.

Charting a new way for BRI?

BRi is yet to reframe its image as a responsible initiative. A good start would be to make it more transparent, inject good governance and best business practices in its implementation.

President Xi’s softening of the rhetoric of ambitious global expansion in the 2nd BRI Forum signals China’s mellowing stance. Involving multiple stakeholders is another necessary step, as China gradually moves towards a more inclusive initiative. Opening doors for local contractors and the workforce of host countries to participate in the implementation of the projects will help remove distrust and allay some of the concerns about China’s geopolitical motives.

BRI needs to demonstrate its commitment to international rules and technical standards to gain legitimacy as an international initiative. The joint statement from this year’s Forum called for “high quality” projects and standards. Even though China earlier disregarded WTO in setting up an independent arbitration court to resolve cross-border BRI disputes, this year’s BRI Forum shows positive developments, as China has signalled intentions to open its borders, allowing foreign investors to operate with full stakes.

This year’s BRI Forum has ended with renewed optimism about BRI and China in general. The Huawei debacle and the consequent geopolitical tussle in recent months have been a great source of distress for China, as international concerns continue to grow about Chinese motives.

A larger international presence at this year’s BRI forum and renewed optimism generated from President Xi addressing concerns over Chinese motives are good starting points for the reforms necessary to turn BRI into a truly global, multilateral development platform. For China, the parting message from its partners would be, “actions speak louder than words”.

Syed Munir Khasru is Chairman of The Institute for Policy, Advocacy, and Governance (IPAG), which has a presence in Melbourne, Dubai, Vienna & Dhaka. He can be contacted via e-mail: munir.khasru@ipag.org

You are in: Home / Resources / Commentary / China tries to win over critics of the new Silk Road