Election watch from across the Bengal border 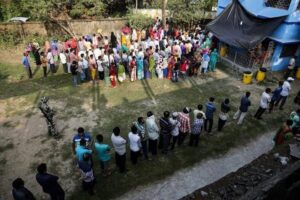 Bangladesh waits to see whether the poll result in West Bengal impacts its identity as an inclusive, progressive society

As the high-profile contest in India’s State elections in West Bengal is under way, Bangladeshis are curious onlookers not only because of the geographic proximity and strong socio-cultural ties between the two Bengals but also on account of the ramifications the electoral outcome may have on India-Bangladesh relations.

During Bangladesh’s liberation war in 1971, West Bengal played an important role by sheltering most of the 10 million refugees. Political leaders were also accommodated with the provincial government of Bangladesh setting up headquarters in Kolkata. On June 15, 1971, the late Pranab Mukherjee suggested in the Rajya Sabha that India should recognise the Bangladesh government in exile. In 2013, Bangladesh conferred the Liberation War Honour on Pranab Mukherjee who endearingly called himself a “son-in-law” of Bangladesh. The late West Bengal Chief Minister Jyoti Basu also played a pivotal role in forging the Ganges water treaty between the two countries in 1996.

Given the shared history, language, culture and cuisine between the Bengals, there is interest on both sides to foster good relations through increased trade, improved connectivity, and cultural exchanges. For Bangladeshis, West Bengal is a popular destination for medical treatment and shopping.

The relationship between the Bengals is not without its challenges, one of the main factors being the failure to sign the Teesta water-sharing treaty. More than two crore Bangladeshis are dependent on the river for their livelihood. In the dry seasons, West Bengal diverts water for irrigation in the north which causes a severe water shortage in Bangladesh. During the monsoon, large volumes of water are released from the Teesta Barrage causing large-scale flooding and riverbank erosion in Bangladesh.

West Bengal Chief Minister Mamata Banerjee’s flip-flop on this vital issue has had an impact on the relationship between the two Bengals and also at the India-Bangladesh state level. The closest the two countries came to signing a water-sharing treaty for Teesta was in 2011 during the visit of then Prime Minister Manmohan Singh to Bangladesh.

Ms. Banerjee was set to be a part of the entourage to sign the water-sharing treaty but her last minute withdrawal led to a stalemate in signing it. Such moves could prove costly to India and even push Bangladesh to China which has agreed to fund the nearly $1billion “Teesta River Comprehensive Management and Restoration project”.

CAA and the NRC

In contrast, Ms. Banerjee’s stance regarding the Citizenship (Amendment) Act, or CAA, and the National Register of Citizens (NRC) have been largely appreciated in Bangladesh. In an interview in 2020, Bangladesh Prime Minister Sheikh Hasina said that though the CAA is India’s “internal matter”, she added, “We don’t understand why [the Indian government] did it. It was not necessary.”

Though India has assured Dhaka that the NRC and the CAA are domestic issues not affecting Bangladesh, Dhaka’s concern is natural as Bangladesh is at the heart of the foreign nationals’ issue spreading across India from Assam to West Bengal. Certain remarks by India’s Home Minister, Amit Shah, about immigrants from Bangladesh, referring to them as “termites”, have added to these concerns.

India’s Home Minister’s recent comments about poor Bangladeshis going to India have also drawn sharp reactions from Dhaka. Bangladesh Foreign Minister A.K. Abdul Momen remarked; “There are many wise people in this world [like Amit Shah] who don’t want to see even after looking, they don’t want to understand even after knowing about it.” In the Global Hunger Index 2020, India ranks 94 and Bangladesh 75. In 2019, the population below the poverty line in Bangladesh was 9.2% compared to India’s 10.7%. During the pandemic, Bangladesh maintained a GDP growth of 3.8% in 2020 while India had a negative GDP growth.

So, do Bangladeshis have a stake in what happens? Ms. Banerjee’s claims of having close ties with Bangladesh do not carry much weight given her political whims and opportunism. On the other hand, being a moderate, progressive Muslim majority country, the concern on this side of the border is whether a BJP win will divert the course of history and dilute West Bengal’s core identity as an inclusive, tolerant, and progressive society.

Whatever may be the election’s outcome, there is no apparent reason to feel either euphoric or optimistic on this side of the border.

Syed Munir Khasru is Chairman of the international think tank, The Institute for Policy, Advocacy, and Governance (IPAG). Email: munir.khasru@ipag.org

You are in: Home / Uncatagories / Election watch from across the Bengal border