Myanmar must accept the Rohingya Muslims as its own 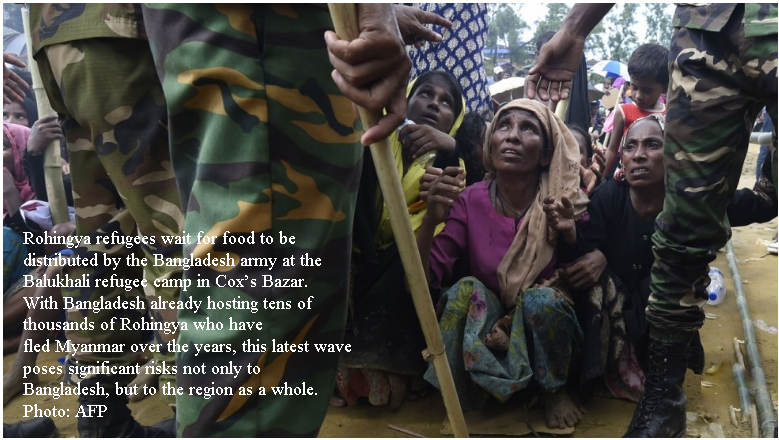 An unprecedented 400,000 Rohingya have crossed into Bangladesh since August 25 to flee persecution and death in Myanmar. Bangladesh, itself densely populated and mired in rural poverty, is struggling to manage the massive influx. Most of the refugees are encamped in Cox’s Bazar, a resource-strapped district in southern Bangladesh.

With the country already hosting tens of thousands of Rohingya who have fled Myanmar over the years, this latest wave poses significant risks not only to Bangladesh, but to the region as a whole.

So far, Bangladesh has responded to the humanitarian crisis with compassion. Some 810 hectares of land have been provided to house the arrivals in makeshift camps, though the ultimate goal is repatriation.

By contrast, the regional powers in South and Southeast Asia are either acting like an idle bystander or waiting for things to play out.

In Europe, the EU committed billions of dollars to help Turkey accommodate the flow of Syrian refugees. Bangladesh has not received anything close to that from its neighbours.

The silence from India, considered Bangladesh’s biggest regional ally, is especially deafening. It has not spoken out against the atrocities being committed against the Rohingya, and even disassociated itself from the “Bali declaration” adopted by the recent World Parliamentary Forum on Sustainable Development held in Bali, in which the Rohingya plight was mentioned.

Yet, the issue must be addressed, or the refugee crisis will become a security concern for both Bangladesh and India. The refugee camps can easily become a breeding ground for terrorism. Moreover, the growing refugee population will also exacerbate poverty, raising already high illiteracy and unemployment rates.

Myanmar must accept the Rohingya as its own. Its controversial 1982 citizenship law denies the Rohingya Muslims any recognition from the state. While they have been permitted to live in Myanmar, they are considered by the authorities to be “resident foreigners” – that is, illegal immigrants from Bangladesh with no ancestral ties to Myanmar.

The end of British rule in Myanmar in 1948 ushered in a new nationalism, which unfortunately included discrimination against the Rohingya. It is foolhardy to think that the Rohingya can ever be sent back to their “place of origin”, when they and their forefathers have been living in Myanmar since the 12th century.

You are in: Home / Resources / Commentary / Myanmar must accept the Rohingya Muslims as its own