Sushma Swaraj: A tribute from the neighbourhood 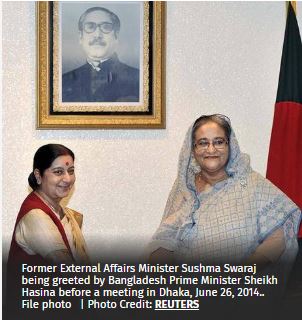 ‘At a time when Muslim majority countries are very easily incriminated, Sushma Swaraj spoke in favour of Bangladesh’s contribution in countering terrorist attacks’

South Asia, despite its progress on many socio-economic fronts, have not yet managed to provide a secured, dignified, just and inclusive life to all its women who make up 48.45% of the region’s population. Sexual harassment, domestic violence, female foeticide, workplace discrimination, income and nutrition inequality are rampant. In the midst of all these grim picture, the illustrious public life of Srimati Sushma Swaraj gives hope and courage to the region’s women. In her long-standing career in politics and public service, she has held multiple important public offices. Although best known as the Minister of External Affairs from 2014 to 2019 under the Narendra Modi governmen’s first term in office, she also held the position of Minister of Overseas Indian Affair (2014-2016), Leader of the Opposition in the Lok Sabha (2009-2014), Minister of Parliamentary Affairs (2003-2004), Minister of Health and Family Welfare (2003-2004), Minister of Information and Broadcasting (2000-2003) and the 5th Chief Minister of Delhi.

South Asia, particularly India has seen quite a few dynamic female leaders in both the public and private sectors like the CEO of PepsiCo Ms. Indra Nooyi, and the recently appointed CFO and Managing Director of the World Bank, Anshula Kant. Sheila Dixit, the recently deceased Chief Minister of Delhi for 13 years, who was Sushma’s political rival and yet close friend yet was also widely respected and loved by Indians at large. However, few Indian women have worn so many hats with so much aplomb for such a long stretch of time. Swaraj’s political career began at a very young age during the 70s when she joined the Akhil Bharatiya Vidyarthi Parishad. At twenty-five she became the youngest Cabinet Minister of the Indian state of Haryana and later became the Chief Minister of Delhi. She was elected a Member of Parliament, a total of seven times. For a women of such achievements, Swaraj had a humbling beginning hailing from Haryana and earning a Bachelor’s degree with majors in Sanskrit and Political Science. She later studied law at Punjab University and started practicing as an advocate in the Supreme Court of India. It was her hard-work, determination and focus that bolstered her to the power corridors of Delhi.

It’s not just her titles that made her an admirable leader. She was respected by politicians from all aisles and was well known for her oratory and leadership skills. She was immensely popular and had 13 million followers in Twitter making her one of the most followed female leaders in the world on Twitter. Her active presence in Twitter exemplified how political leaders of the topmost tier can connect effectively with the ordinary people.

While Sushma herself was a Lok Sabha Member, her husband, Swaraj Kaushal was a Rajya Shabha member. Later during 2000 and 2004 they both became Rajya Shabha members, an occurrence rare in the history of Indian politics. Unlike many of her peers in the South Asian political domain, Swaraj did not hail from an influential political family like Bangladesh’s Sheikh Hasina and Khaleda Zia, or Pakistan’s Benazir Bhutto or India’s Sonia Gandhi or even Indira Gandhi . Her father was an active member of the Rashtriya Swayamsevak Sangh (RSS), but never held any prominent political post which is what makes her accomplishments unique.

Her grace, epitome and popularity not only served as an example for women in India but for the entire South Asia. Studies on South Asia shows that a girl child has to struggle twice as much as a boy child, due to South Asians’ preference for sons over daughters. Women’s participation in politics is very low throughout the region. On an average women hold 15% of national parliament positions. Swaraj was a shining beacon of hope against these presiding regional norms.

Outside India too Sushma Swaraj was well-respected and warmly received. To share few instances, British Secretary of State for the Home Department Priti Patel called her a dear personal friend and the Iron Lady of India. Australian Foreign Minister and Minister for Women, Marise Payne remembered her as a person of great warmth & humanity. Hamid Karzai, Former President of Afghanistan, fondly addressed her as “Behinji Sushma Swaraj” for being a people’s person.

Her stature and dignified ways also made her a respectable leader among BJP’s bitter rival Congress. Congress leader Rahul Gandhi credited her of having friendships across party lines. Congress leaders P. Chidambaram, Manish Tewari, Ahmed Patel conveyed their condolences as another firebrand women leader Trinamool Congress chief Mamata Banerjee, who months ago fought a bitter election campaign with Sushma’s BJP party, only had kind words for her and mentioned sharing many cordial times in Parliament in spite of differing ideologies.

The Prime Minister of Bangladesh, called her a “good friend of Bangladesh.” Swaraj contributed much to the betterment of India-Bangladesh bilateral relations and spoke in favour of Bangladesh’s contribution in countering terrorist attacks. She had further commented that Bangladesh is as much a victim of terrorism as India, words rarely spoken by world leader in a time when Muslim majority countries are very easily incriminated.

Sushma Swaraj has indeed been one of a kind, the likes of who are unfortunately hard to find. Her speech in the 1996 Lok Sabha about the repealing of Article 370 was implemented on the very day of her demise. Although the repealing of the Article has been controversial, the fact that Swaraj had spoken about it in Parliament more than twenty years ago shows her foresight in politics. The world will always remember Swaraj as the dignified and loved politician that she was and her legacy will continue to inspire many – both men and women – in the region. For the men and women of South Asia, her words will continue to echo the corridors of power and challenge the fabric of the society, as she said quite aptly, “There is an urgent need to tackle the ills of the society against women through active participation of all – men, women, society, governments. It is imperative to make women’s empowerment a peoples’ movement.” As she embarks into the journey to the land of no return, may her soul find peace which she tried to deliver to many in the earth.

Syed Munir Khasru is Chairman of the international think tank, The Institute for Policy, Advocacy, and Governance (IPAG) with presence in Dhaka, Melbourne, Vienna, and UAE. em: munir.khasru@ipag.org

You are in: Home / Resources / Commentary / Sushma Swaraj: A tribute from the neighbourhood