The disaster next door: on the Rohingya issue 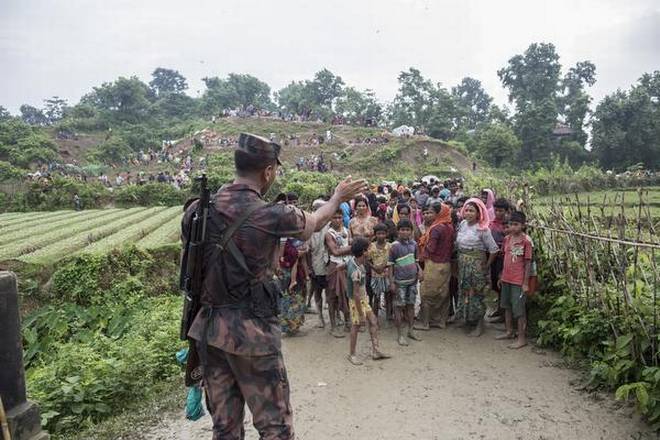 In a span of two weeks, almost 300,000 Rohingya have crossed over to Bangladesh from the northern Rakhine state in Myanmar, putting Bangladesh under immense strain and compelling the refugees to find shelter in squalid, unsanitary camps scattered along the Myanmar-Bangladesh border. Excluded from the 135 officially recognised ethnic groups, the Rohingya have been harassed and hounded by the Myanmar authorities for decades. The latest surge follows attacks on police posts by an extremist Rohingya group in late August and military action. While the Myanmar authorities claim that 400 lives have been lost, advocates cite double this number.
Where is the spirit?
The flight of the Rohingya has quickened in the past two weeks, but Rohingya refugees have been trying to find a home outside their native Rakhine for years now, braving human traffickers and fraught conditions on rickety, overcrowded boats. The Rohingya have also sought refuge in India where they have been shunned, denied basic public services and deemed by authorities as ‘the undesirables’.
While the government has called them to be illegal immigrants and trespassers, the fact is that India, throughout its history, has been generously accommodative towards refugees in the neighbourhood fleeing persecution, which includes Parsis, Tibetans, Afghans, Sri Lankan Tamils, and Bangladeshis during the war of liberation in 1971. India has prided itself in its tradition of Atithi Devo Bhava (the guest is equivalent to god).
The stance on the Rohingya issue by Prime Minister Narendra Modi, during his recent visit to Myanmar, has been disappointing and is contradictory to the values of hospitality and inclusiveness that India stands for. South Asia, particularly Bangladesh, which has been most affected by the crisis, was hopeful that Mr. Modi would express concern about the humanitarian crisis with Myanmar’s State Councillor and Nobel Peace Prize winner Aung San Suu Kyi. Instead, he was seen empathising with Myanmar, and the joint statement at the end of the visit said: “India stands with Myanmar over the issue of violence in the Rakhine state which has led to loss of innocent lives.” In doing so, he overlooked the atrocious crimes committed in the neighbourhood and almost turned a blind eye to both the untold sufferings caused to the refugees fleeing persecution and the resulting difficulties that a resourceconstrained
country such as Bangladesh has been put to — a country which Indian politicians and officials frequently refer to as a role model of friendship in India’s neighbourhood.
Bangladesh’s burden
International relief agencies in Bangladesh such as the office of the UNHCR and the World Food Programme are struggling to attend to the large number of refugees arriving each day on foot or by boat (picture shows refugees at the border, at Teknaf, Bangladesh). Bangladesh, itself one of the world’s most densely populated nations, has hosted more than 600,000 Rohingya compared to 40,000 by India. Initially, hesitant to open borders along the Naf river, Bangladesh has now started allowing in refugees.
Through the International Committee of the Red Cross, Dhaka has proposed that Myanmar secure areas in Rakhine under international relief agency supervision, but there has been no response so far from Myanmar. Bangladesh has plans of making another 607 hectares of land available near the Myanmar border for camps to accommodate refugees. It has also urged the
international community to put pressure on Myanmar to take back the refugees and stop the violence against them. Bangladesh Prime Minister Sheikh Hasina recently said: “It affects a country’s dignity when tens of thousands of its own nationals are fleeing home to take refuge outside.”
On the other side of the fence
Last Friday, India’s move to dissociate itself from the Bali Declaration adopted at the World Parliamentary Forum on Sustainable Development in Indonesia, and which called “on all parties to contribute to the restoration of stability and security … respect human rights of all people in Rakhine State regardless of their faith and ethnicity, as well as facilitate safe access for humanitarian assistance”, puts into question its respect for human rights and the treatment of minorities. It weakens India’s moral authority to speak for minorities in other parts of its neighbourhood. Interestingly Nepal, Bhutan and Sri Lanka joined the declaration.
In his 2015 visit to Bangladesh, Mr. Modi used eloquent phrases to describe the India-Bangladesh friendship. Since 2009, Bangladesh has emerged as one of India’s most trusted neighbours, with Dhaka addressing almost all of New Delhi’s security concerns. This includes cracking down on cross-border terrorism and insurgency conducted against India from Bangladeshi soil. The India-Bangladesh border today is one of the safest for India, enabling massive redeployment of its vital border resources for other purposes. Despite this, Bangladesh has neither received water from the Teesta or support in times of humanitarian crisis from its biggest neighbour.
Ironically, when Bangladesh procured two submarines from China, indicating the growing economic and defence ties between the two countries, New Delhi rushed its then Union Defence Minister, Manohar Parrikar, to Dhaka to elevate military cooperation. Such
promptness is missing when it comes to supporting Bangladesh when it is overcome by helpless refuges persecuted at home and accepted by none. The world does not expect Myanmar’s other big neighbour, China, to be vocal about the atrocities being committed, but as the upholder of democratic values, India has a unique opportunity to demonstrate statesmanship and regional leadership by mediating a solution to the Rohingya crisis on the basis of a report of the Advisory Commission on Rakhine State headed by former UN Secretary General Kofi Annan and set up by none other than Ms. Suu Kyi.

While Myanmar is an important factor in India’s ocean diplomacy and a valuable stakeholder in its ‘Look East’ Policy, India’s nonchalant attitude towards the humanitarian plight of the Rohingya reflects inadequate moral leadership and an inability to rise to the occasion as expected from a regional power vying to enhance its influence in the neighbourhood. One of the reasons why India, despite its enviable soft power and formidable hard power, fails to generate confidence in the region, including with friends such as Bangladesh, is its complex geopolitics based more on political opportunism and economic interests as opposed to
principles and values, practised consistently. This must be food for thought for India.
_________________________________________________________________________________

You are in: Home / Resources / Commentary / The disaster next door: on the Rohingya issue