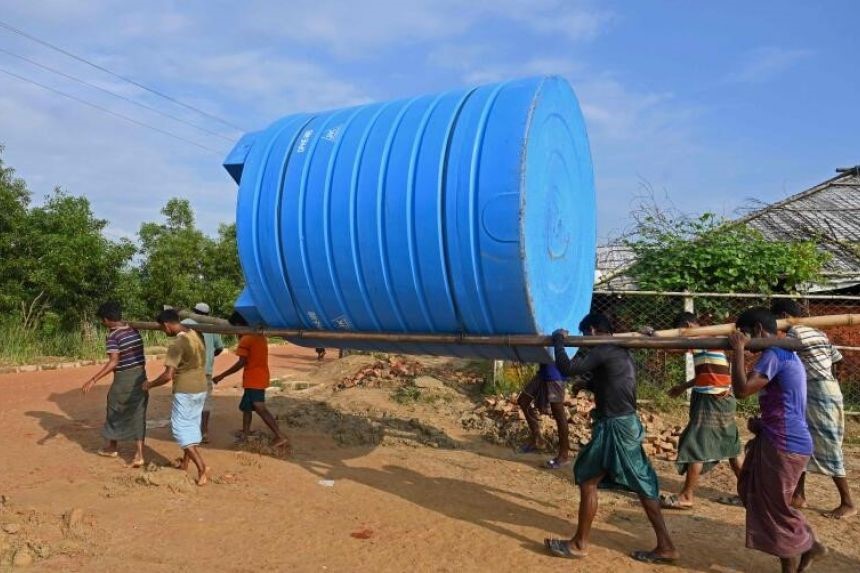 The protracted presence of Rohingya refugees in Cox’s Bazar and the negative effects on economic stability, security and the environment have taken a toll on public sentiment in Bangladesh.
PHOTO: AGENCE FRANCE PRESSE

With the Asean Summit taking place later this month, the problem of Myanmar looms large – for the regional grouping as well as Bangladesh.

In an unprecedented move, foreign ministers from Asean agreed at an emergency meeting last Friday to exclude General Min Aung Hlaing, leader of the Myanmar junta, from the Oct 26 to 28 summit. It was intended as a rebuke to the junta for its failure to make progress on the agreed road map to peace after the February coup.

While the spotlight has been on the turmoil following from the coup, there is also another massive, unresolved issue – the Rohingya. It is a pressing humanitarian problem that concerns Bangladesh too. Over a million Rohingyas are being sheltered in Bangladesh after waves of refugees fled their homes in Myanmar’s Rakhine state to escape ethnic cleansing in 2017. They risk being forgotten as new crises grab the world’s attention.

Although Bangladeshis have largely been supportive of the government’s decision to host the Rohingya refugees, their protracted presence and negative effects on economic stability, security and the environment, especially in the Cox’s Bazar area, have led to a palpable shift in public sentiment.

Patience is growing thin. Bangladesh spends around US$1.21 billion (S$1.63 billion) a year supporting the refugee community. But a stalemate on the repatriation process is increasing the burden as more flee Myanmar, inflation spikes and foreign aid drops. Some 4,300ha of forested land has been cleared to accommodate the refugees, exacting a toll on the environment.

Meanwhile the Covid-19 pandemic is fuelling resentment among Bangladeshis who fear outbreaks spreading from the refugee campsites to the wider community.

There is also growing security concern arising from reports of violent crimes within the Rohingya community and the trafficking of children and women. The assassination last month of moderate Rohingya leader Mohib Ullah by extremist elements underscored the growing threat of radicalisation of young Rohingyas by international terrorist groups.

Failure to facilitate a safe and dignified repatriation has led to controversial decisions, such as the shifting of thousands of the refugees from the border camps to a remote island Bhasan Char.

Bangladesh’s Prime Minister Sheikh Hasina Wazed raised the Rohingya issue at the United Nations General Assembly on Sept 25. The Asean Summit was meant to be an opportunity for Dhaka to open talks with South-east Asian leaders to press Myanmar on the repatriation of Rohingyas.

With the junta’s leader excluded from the summit and the broader Myanmar crisis unresolved, however, it would be hard to see an early resolution of the Rohingya problem.

Why Asean is important to Bangladesh

Bangladesh’s Foreign Minister A.K. Abdul Momen in August expressed interest in his country becoming an Asean Sectoral Dialogue Partner, which would make it easier to step up cooperation in areas such as development and capacity-building.

There is a pressing domestic reason why stronger ties with Asean is a priority issue for Dhaka. Because Bangladesh had done well economically in recent years, it is expected to graduate from its status as a least developed country in 2026. This graduation will make the country more attractive for foreign investors, but it will also mean the loss of trade privileges for the export market that could cost Bangladesh billions in revenue. Asean is seen as part of a broader plan to offset the impending losses and protect its export growth.

By 2030, combined Asean gross domestic product is expected to hit US$10 trillion. That, and its consumer base of more than 660 million people and a burgeoning middle class, make South-east Asia a more promising region for Bangladesh’s growth prospects than its immediate neighborhood.

Bangladesh’s membership in the South Asian Association for Regional Cooperation (Saarc) has failed to result in any substantial economic gain. Insurmountable Indo-Pakistan disputes have made South Asia one of the world’s least integrated regions, with the attendant effects on trade.

China is Bangladesh’s largest trading partner and biggest foreign investor, but Bangladesh is treading cautiously out of geopolitical concerns and the need to avoid over-reliance on a dominant trading partner.

India is Bangladesh’s largest trading partner in South Asia. However, a number of unresolved issues, like water sharing of common rivers and border killings, continue to be a bone of contention, exacerbated by the Sino-India tug of war to strengthen influence over Bangladesh.

The European Union is a big export market for Bangladesh but Dhaka’s relationship with the EU remains vulnerable to disputes over human rights and worker protection issues.

From Dhaka’s perspective, not only would South-east Asia give Bangladesh access to a huge market, closer integration will facilitate Bangladesh’s linkage with wider global value chains, catalysing the country’s export diversification.

In the next three to four years, pharmaceutical exports alone to the Asean market has the potential to reach US$1.2 billion from the present US$60 million, provided non-tariff and technical barriers are addressed. A free trade agreement with the bloc could create a conducive environment for greater intra-regional trade and investment.

Asean too has much to gain from stronger ties with Bangladesh. By virtue of its location in the eastern region of South Asia and connectivity with neighbouring regions, Bangladesh is uniquely positioned to be the hub connecting the two regions.

Bangladesh’s robust growth trajectory, a large market of over 164 million, a growing information and communications technology industry along with a liberal and competitive investment climate make it an attractive market.

To be sure, the challenges facing Asean and Bangladesh are plentiful and not easily resolved. But as countries worldwide gear up for recovery post-pandemic, there is much to be gained from Asean-Bangladesh cooperation as both parties seek new growth avenues, restructure their supply chains and build resilience to withstand future economic disruptions.

Professor Syed Munir Khasru is chairman of the international think-tank, The Institute for Policy, Advocacy, and Governance, with a presence in Dhaka, Delhi, Melbourne, Vienna and Dubai.

You are in: Home / Uncatagories / The Rohingya challenge as Bangladesh seeks closer Asean ties