As Russian forces advance from the north, east and south and try to encircle Kyiv, Ukrainian residents caught in the war are fleeing their homes. As they try to escape, they face a devastating situation, battling hunger, and walking long distances while exposed to sudden shelling by Russian forces.

At least 2,400 civilians have died in the southeastern city of Mariupol, for example. Hundreds of thousands are trapped, with utilities cut off and supplies running out. Some of the 30,000 civilians who managed to flee had to melt snow for drinking water and have eaten only food scraps.Ukraine has declared martial law, prohibiting men aged 18 to 60 from leaving the country. As a result, they have been separated from their families as women and children tried to flee. Ukrainian men and women from across Europe have even returned, to join the defence forces.

The refugees, almost all women and children, face difficulties they could never have imagined. While some have been taken in by European families and some children have found safety with relatives, most are living in temporary shelters in the extreme cold and are short of food.Ukrainian women and children seeking to cross into Poland face long delays. And millions of Ukrainians have been internally displaced, with the western city of Lviv reaching its capacity to accommodate extra people.

Europe is doing its best to accommodate those fleeing the war. Poland has taken in the most refugees, more than 2 million, followed by Romania, Moldova, Hungary, Slovakia and others. Moldova, among others, has called for international assistance.More than 100,000 people in Britain signed up on the launch day of a new scheme to host individuals or families rent-free in their homes or another property for six months. The scheme will be open for three years, and hosts will receive £350 (US$460) per month, with no upper limit. More than 6,100 visas were also issued through the Ukraine Family Scheme. Ireland, meanwhile, has lifted visa requirements for Ukrainians.

The European Union estimates the refugee count could reach around 7 million. The UN refugee agency estimates that more than 2.5 million people, including 1 million children, have fled so far in the largest European refugee crisis since World War II.Eastern European countries are already struggling to cope with the influx. Moving some refugees to other countries to relieve the pressure would be a huge logistical challenge, both for the people and the host countries.Within Ukraine, amid plummeting temperatures, millions of children have been displaced, trekking through harsh weather, with poor supplies of food, clothes and heat. Children are particularly vulnerable to hypothermia, and mental trauma. A lack of transport is exacerbating their plight, as are the continuous explosions and artillery attacks.There are growing concerns that human traffickers are targeting refugees under the pretence of offering help. Women face the additional burden of caring for children and the elderly.Ukrainian refugees, especially those from Middle Eastern and African countries, also face racist and xenophobic responses. Additionally, some countries have been unwilling to take in people even when they qualify for refugee status.While providing emergency aid, the United States has indicated that Europe should be the refugees’ primary destination. Around 140 countries allow in Ukrainians without a visa or provide visas on arrival. The New Zealand government has announced that Ukrainian-born New Zealand citizens and residents can bring in family members, giving them the right to study and work. 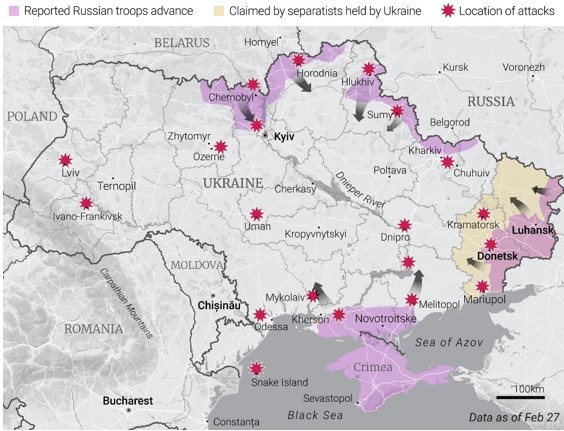 The United Nations is scaling up its delivery of life-saving support and humanitarian relief, especially for vulnerable groups. It has launched two emergency appeals, seeking US$1.7 billion – one for the escalating humanitarian needs of 6 million internally displaced people for three months and another for the refugees who have fled Ukraine.The Regional Refugee Response Plan outlines a comprehensive response to support the efforts of host countries, including the financial requirements of 12 national and transnational partners. However, these plans only look a few months ahead and a long-term vision is still lacking.The exodus is expected to continue for the foreseeable future, but the response remains underfunded. Host countries, in issuing visas or allowances, are only offering short-term solutions.Hosting and integrating Ukrainian refugees could cost these nations US$30 billion in the first year alone, according to new analysis by the Center for Global Development. Meanwhile, permanent integration could reshape Europe’s economic landscape.Europe is already coping with the challenges of high inflation, supply chain disruptions and the Covid-19 pandemic. Providing long-term assistance to refugees will strain European economies.

However, migration experts and economists say it is too early to tell whether most Ukrainians will stay, as returning home could still be an option. This is in contrast to the 2015 movement of migrants from the Middle East and North Africa, who cannot return home as they fear persecution.It may be necessary for host nations to comprehensively integrate refugees as full citizens, to protect both the people and their economies. Government schemes and programmes are needed to support children, women who lack financial support, people with disabilities, and the elderly.

For the time being, a humanitarian crisis is unfolding, and getting worse each day, under the watch of the world as Ukrainian men, women and children head into an uncertain future

Professor Syed Munir Khasru is chairman of the international think tank, The Institute for Policy, Advocacy, and Governance (IPAG), with a presence in Dhaka, Melbourne, Dubai, Delhi and Vienna

You are in: Home / Ukrainian refugees suffer as the world slowly wakes up to growing humanitarian crisis