As ASEAN marks its 50th Anniversary, the bloc’s economic achievements with regards to intra-regional trade and connectivity have been remarkable.

Movement of people within ASEAN has significantly increased since its inception. This year Thailand has had an influx of around two million people from Myanmar, Cambodia and Vietnam. Malaysia had three million estimated migrant workers from Indonesia, Philippines and Myanmar. Singapore frequently relies on professionals from Malaysia and Indonesia. Such movements have brought about closer cooperation and people-to-people connectivity among ASEAN countries, although issues with regards to legalizing migrant workers remain a challenge.

A plan of action in transport and communications has also been implemented to further multi-modal transport, facilitate trade, achieve inter-connectivity in telecommunications, and streamline road transport laws and regulations among the member nations. A feasibility study has been conducted on the development of a rail link from Singapore to Kunming in Southern China, passing through Malaysia, Thailand, Cambodia, Laos, Myanmar and Vietnam, to enhance seamless connectivity among the nations to boost intra-regional trade and connectivity. Initiatives have been undertaken to promote ASEAN as a tourist destination, conserve cultural and environmental heritage, endorse intra-ASEAN travel and encourage better services in the sector.

Given all its accomplishments in trade and connectivity, it still remains for ASEAN to be as closely integrated socio-politically as the European Union (EU). Diversity in institutions, markets and economies and the different pace of development among members in many instances have acted as a hindrance. While Singapore and Brunei have high GDP per capita, Laos, Cambodia and Myanmar lag far behind in terms of economic growth and modernization. The region needs to have an authentic discourse on inequality amongst itself. There exist stark political, ethnic, cultural, religious, and linguistic diversities among ASEAN states. In the EU, new member states must have stable institutions guaranteeing democracies with market economies, but ASEAN member states range from authoritarian, to socialist, to fully democratic.

ASEAN has yet to achieve milestones in terms of forming a unified body to address issues of security, human rights and good governance. A central mechanism has not yet been formulated to enforce compliance among member states if they falter to meet agreed-upon regulations and standards. No legally binding dispute-settlement mechanism is present either in the economic or political sphere. There is no mechanism to penalize states if they fail to follow through on agreements, declarations or deals, and this is one issue ASEAN leaders will have to grapple in the next 50 years.

ASEAN as a bloc has remained complacent and ineffective in handling regional human rights issues. The Rohingya crisis in Myanmar has demonstrated the failure of ASEAN to unify against a regional humanitarian crisis committed by one of its members. Despite reports of human rights abuse, ethnic cleansing and mass killing and arson, other than the Muslim majority Indonesia and Malaysia, ASEAN has mostly maintained its stance of non-interference and failed to adequately address the issue.

Although ASEAN had attempted to address the human rights issue by forming an ASEAN Intergovernmental Commission on Human Rights in 2009, and, by 2012, had drafted the ASEAN Human Rights Declaration, the declaration was strongly criticized by international observers and ASEAN civil society. It was described by the Human Rights Watch as a “declaration of government powers disguised as a declaration of human rights.” ASEAN civil society was not consulted during the drafting process. One of the concerns about the declaration was that it had used ‘weasel’ words, which have actually allowed governments to violate their human rights commitments. Unlike the EU, there is a lack of a sense of ownership among ASEAN citizens.

The people of the ASEAN countries still do not participate in the decision-making process of the forum and it is mostly a forum for policy-makers and bureaucrats only. 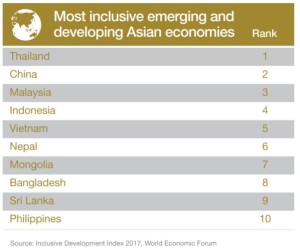 Many ASEAN nations do not yet fully practice freedom of expression, and free press in most nations is severely limited. Countries in the region continue to rank badly in the World Press Freedom Index. Nations experience intermittent violence related to the subjugation of press freedom. Draconian legislation supporting subversion of press freedom continues to halt any attempt towards making the media more free.

The organization does not have a unified and coherent strategy to effectively respond to the geopolitical changes that East Asia is expected to confront in the coming decades. A waning US and an increasingly assertive China will have manifold implications for the region.

While some states in the bloc are embroiled in legal disputes with China over rights in the South China Sea, the region has seen long-held US allies, like the Philippines veering towards a richer and more assertive China, toppling the geopolitical balance in the region. Countries may end up having a divided allegiance between the US and China, negatively affecting the political unity of ASEAN.

The region needs massive infrastructural investments. According to the Asian Development Bank (ADB), ASEAN’s infrastructure need is expected to be $60 billion a year from 2010-2020.

Along with a gap in financing there is also lack of adequate regulations and investment mechanisms. There are mega projects like the Singapore-Kunming high-speed railway but the proposed project in high speed rail is expensive and Laos might not be able to carry the debt. Political favouritism in awarding public contracts compromises the quality and expected benefits of such massive infrastructure projects.

ASEAN also needs to figure out how to navigate the arriving technological disruptions. The ongoing Fourth Industrial Revolution comprised of automation, digitization, cloud computing and the internet of things could bring about much needed benefits to the region in the form of better jobs, more connectivity, improved services like healthcare and education and more business and investment.

However, technological disruption comes with its own set of challenges. For example, if robots become cheaper, can manufacturing still lead to job creation? How the region can create a vibrant innovation ecosystem to teach IT and technology skills is another issue which ASEAN will have to deal with.

ASEAN, through sheer will power, prudent policymaking, and pragmatic leadership has transformed the face of once-impoverished East Asia.

Quite unique to Asia, ASEAN has managed to forge a sense of community among its member states and has managed not to let inter-state disputes get out of hand. Formed initially with the aim of countering the spread of communism in the region, the organization has continued to do well even though the threat of communism has long since evaporated.

However, the next 50 years will test both the political resolve and economic resilience of ASEAN as never before, as Asia navigates into unchartered geopolitical terrains and socio-economic challenges unleashed by new waves of innovation and political aspirations.

You are in: Home / Resources / Commentary / What we’ve achieved and the challenges ahead – 50 years of ASEAN